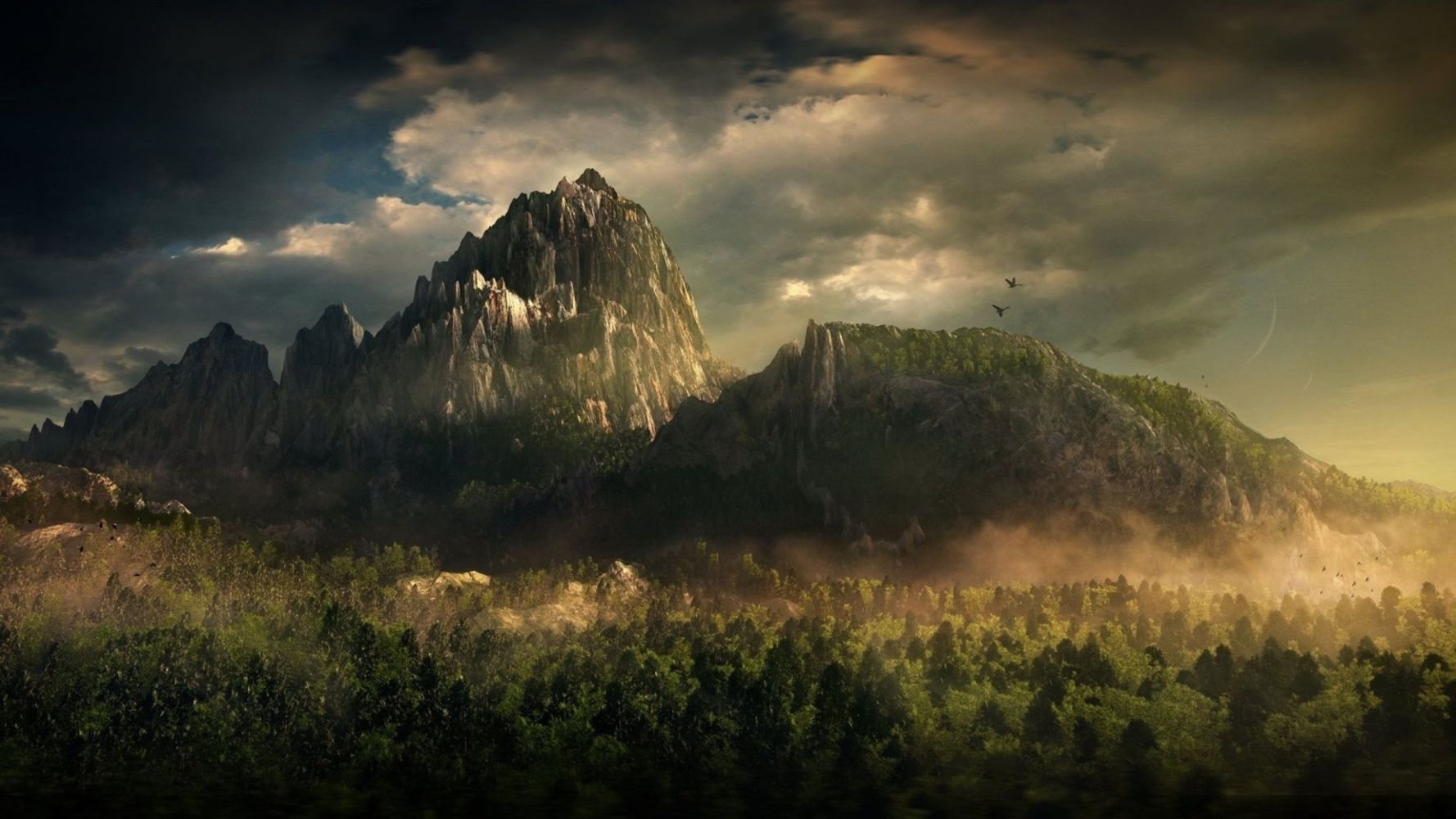 The Nine Kingdoms consists of:

The Nine Kingdoms are ruled by High Lords and Ladies who are oath sworn and bound to the High King who rules from Anglemere Castle in Kingsholme, the Holme.

Taken from the Holy Scriptures of the Trinity, First Passage of the Article of Truth, Book of Faith

In the beginning there was the One God. The One created everything. He created the ground beneath, the sky above and everything in between. The One set his home in the heavens ablaze with light to warm this new world, then filled it with life and watched.

He found no order, only chaos. The creatures of his world were wild. They existed at his whim but had not the wit to know it. They had the heart and the body but not the mind to understand. So he created humanity.

To them he gave wisdom and knowledge and he watched.

At first there was order. Humanity worshipped him and revered his teachings and he watched them for a while, content. After a time however, darkness from the cosmos seeped into the world. It corrupted, giving humanity wants and desires above what was needed. It made them cruel and selfish. They coveted more of the world and in their greed the One was forgotten.

The One did not despair for he loved his creation. They were capable; he had witnessed the good in them before the corruption. But his children were weak of mind, body and heart. They had lost their faith and their way.

The One would not place them on the path again. To be worthy they must find it for themselves, or be excised from the world. But the One was a caring and compassionate creator and devised a way to help them see the way.

The souls of all creatures possess the two pillars that govern the heart and body but only humanity possessed the third: the mind.

Scouring humanity, the One weighed each soul for what was needed. He looked for those adrift but who had not lost their faith and he was pleased. Not all had forsaken him, some still believed. The three most worthy and that suited his purpose were Ankor a holy man, Nihmrodel a wanderer and Kildare a warrior.

Elevating them above all others, the One made the moons where the three could reside and watch over humanity. In his stead, they would guide them. They became the Trinity and to each he gave one of the three pillars, to guard and nurture.

Ankor – the lifegiver, called by many the Saint. Guardian of the pillar of the heart. The current voice of Ankor is High Cardinal Rand Luxurs.

Kildare  –  the protector, called by many the Soldier. Guardian of the pillar of the body. The current voice of Kildare is High Cardinal Worsten Lannik.

Nihmrodel – the traveller, called by many the White Lady. Guardian of the pillar of the mind. The current voice of Nihmrodel is High Priestess Maris Jenah.

The Order was established during the first war of the Taken, by Elora dul Eladrohim, an ilfanum.

Created during humanity’s darkest hours, when chaos reigned and the Morhudrim came close to subjugating all life in the fractured realms. The Order brought hope, organising humanity’s defence of the realms and bringing its disparate peoples together.

The Order recognises no religion and bows to no creature, human or otherwise. Protectors of the land their first tenet is the eradication of the Morhudrim, ancient beings that precipitated the War of the Taken, unseen now in a thousand years.

Keeper – The keeper of the archives and head of the Order.

Knights of the Order – Often called the Bonded. Individuals that have passed ‘the trial’ and become more than they were. Highly trained warriors that are long lived and learned in the ways of Ki-tae and Tae’el.

Hand of the Order – A hand consists of five warriors, trained in the Order Halls with each hand assigned to an Order Knight.

Tankrit – A large island in the Great Expanse, off the east coast of Cumbrenan and home of the Order.